Posted on June 5, 2016 by Alliance For Religious Freedom

Yesterday, Faith2Action organized “Don’t Target our Daughters Day” – a protest against Target’s new policy that would allow those with gender identity confusion (transgender) to use the store’s public restroom of their choice. This policy will encourage sexual predators and put women and young girls in danger. My wife and I were truly blessed to participate in this peaceful protest at the Target store on Pine Ridge Road in Naples Florida. 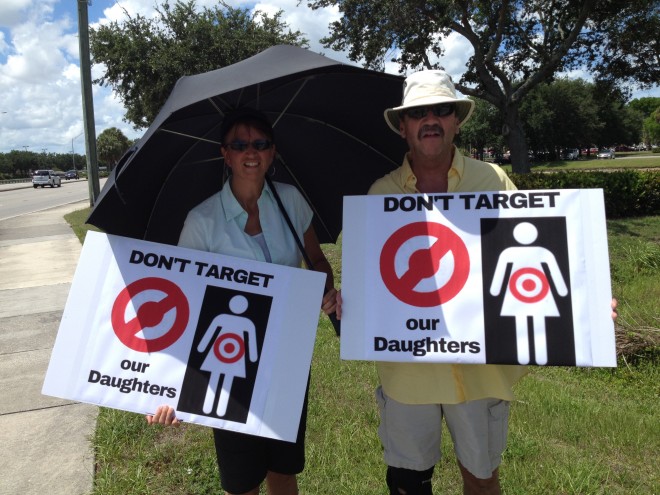 In the 3 1/2 hours that my wife and I participated at the intersection in front of Target there were many who showed their support by blowing their horns, but there were also many who showed their disapproval by the use of hand gestures. What mattered is that God showed us His approval for being there. We were able to show love for our neighbors by peacefully demonstrating that Target’s policy (along with our president’s decree) is not acceptable. By our prayers and presence we might have possibly deterred someone from acting out a perverted plan against a child or brought awareness to a mother not to let her child use the restroom unattended. We took a stand yesterday with the “sword of the spirit,” knowing in our hearts that we have been given moral authority assigned to us by God. God’s Word is clear – “He who made them at the beginning ‘made them male and female” (Matthew 19:4).  Gender identity confusion (transgender) is an emotional disorder and should be treated prayerfully and compassionately with the love of Christ. “For God is not the author of confusion but of peace…” (1 Corinthians 14:33). The Lord showed us that without Christian influence in our public arena, many will be confused about the truth and led down the destructive path of moral relativism. Jesus said: “I am the way, the truth, and the life. No one comes to the Father except through Me” (John 14:6).

Blessings, Tom Hughes
allianceforreligiousfreedom@gmail.com
“In all your ways, acknowledge Him…” Proverbs 3:6
This entry was posted in Uncategorized. Bookmark the permalink.