I am Speaking Out

Posted on January 25, 2016 by Alliance For Religious Freedom

For nearly five years, I have studied the spiritual nature of our Founding Fathers and the Judeo-Christian ethics that built the foundation of our great nation. During this time, David Barton of Wallbuilders has been an inspiration and my main source of historical facts. Mr. Barton has in his possession tens of thousands of original documents and writings from the Founding Era – history that has not been re-written. Mr. Barton, in my opinion, is the foremost authority on America’s true history and the moral and religious influence on our nation’s Constitution. The Lord has called out my wife and I to “sound the trumpet” to our fellow Christians who have fallen asleep while our nation crumbles. We can still repent and turn back to Him!

This week, I was invited to speak to the Christian Patriots of Bradenton, Florida and the local Tea Party Group. 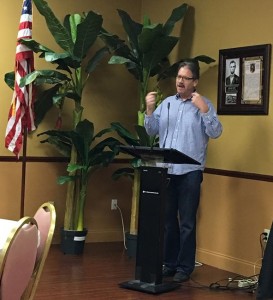 I gave a message titled “The Church has rendered to Caesar what is God’s.” I spoke about how many pastors and Christians have been led to believe that they should never be involved in civil government. I then explained how this violates Biblical and historical precedence. I also talked about the cooperative relationship that our Founding Fathers established between the church and state, not the “rigid wall” of separation we see today.

Biblical references of how this cooperation was/is established starts in Matthew 22:21 where Jesus said “render therefore to Caesar the things that are Caesar’s, and to God the things that are God’s.” In this verse, Jesus is teaching us that there are two jurisdictions and we have separate responsibilities in both of them. In Matthew 28:18 Jesus said, “All authority in heaven and on earth has been given to me.” Therefore, in and through man He establishes His authority. Jesus affirms this in John 19:10-11. Pilate said to Jesus, “Don’t you realize I have power either to free you or to crucify you?” Jesus answered, “You would have no power over me if it were not given to you from above.”

The reason for the success of America’s Republic was that pastors were the cultural thermometers and our elected leaders were the product of the pulpits. They gave “election sermons” calling out the names of candidates, their party affiliation and then compared the political issues that the candidates supported with scripture. Ministers would remind Christians of the stewardship government that God had entrusted to them. Pastors taught that qualifications for our rulers come from God. Exodus 18:21 says,“You shall select (vote to elect) from all the people able men, such as fear God, men of truth, hating covetousness; and place such over them to be rulers of thousands (federal), rulers of hundreds (state), rulers of fifties(county), and rulers of tens (local leaders).” Pastors taught that rulers should“shake their hands from holding bribes” (Isaiah 33:1) because “a gift blindeth the eyes of the wise, and perverteth the words of righteousness” (Exodus 23:8). Romans 13:4 says,“[A ruler] is God’s minister to you for good.” The cooperative relationship between the church and the state was a success because they both were inspired by the same message.

I then posed the question, what do we do? We need to take back from Caesar what is God’s. I provided some action ideas that, through faith alone, each person would be led to act in some way, believing that the hand of God would move once again in our nation. “But Jesus looked at them and said, ‘With men [it is] impossible, but not with God; for with God all things are possible.'” (Mark 10:27)  The prophet Malachi spoke that, “Ever since the time of your forefathers you have turned away from my decrees and have not kept them. Return to me, and I will return to you.” (Malachi 3:7)

Note: If you would like to hear more, I am available anytime to speak about the responsibility that pastors and Christian once embraced in regard to the stewardship government that God has entrusted us with. May we revive that desire and responsibility once again today. Please contact me at patriotpreachers@gmail.com to schedule a time to speak at your church or small group.

Thank you for your support over the years, Tom Hughes

allianceforreligiousfreedom@gmail.com
“In all your ways, acknowledge Him…” Proverbs 3:6
This entry was posted in Uncategorized. Bookmark the permalink.