“Separation of Church and State”

“And ye shall know the truth, and the truth shall make you free.” John 8:32

“No purpose of action against religion can be imputed to any legislation, state or national, because this a religious people…. [T]his is a Christian nation.” – 1892 U.S. Supreme Court

The Truth regarding the phrase “separation of Church and State”

The misconception today regarding “separation of Church and State” has caused many Americans to be confused in the practice of their Christian faith.   As you read the facts below, it will clearly explain that the phrase “separation of Church and State” was never a part of the first amendment nor was it ever intended to be.  This inaccurate account of our First Amendment right has only developed within the last 65 years of our great country’s 235 year history.  Thus a fulfillment of the quote from Dr. William James, commonly known as “The Father of Modern Psychology” who stated “There is nothing so absurd but if you repeat it often enough people will believe it.”   However, we still have freedom of religion and Americans should fight to preserve that right and our Godly heritage for generations to come.

Here are the facts of history in regard to the issue “separation of Church and State.”  (these facts and material were taken from David Barton’s DVD titled “America’s Godly Heritage”.  We urge you to watch this DVD.  We are sure that it will have a great impact on your perspective of America’s history. www.wallbuilders.com)

The first debate regarding the First Amendment took place June 7 – Sept 25th, 1789.  The reason the freedom of religion issue was addressed by the Founding Fathers as the First Amendment in the Bill of Rights was because they didn’t want a repeat of the same problem in America that they had with the British government regarding establishing a national denomination.

The First Amendment – Limits the Government (not people!) by:

Origin of the phrase “Separation of Church and State”

This phrase was penned thirteen years after the First Amendment and was written by Thomas Jefferson.  He fought for freedom of religion for Baptists, Quakers, Presbyterians and others not in the British state–established Anglican Church.  Patrick Henry, James Madison, George Washington, George Mason and many others fought for the rights of religious expression for all Christians, including Baptists, before and after the Revolution.  In 1801, Thomas Jefferson became the 3rd President of the United States.  The Baptists were elated.  Jefferson received letters of congratulations from Baptist groups across the nation.  One was from the Danbury, CT Baptists.  The letter from the Baptists in Danbury, CT expressed:

Thomas Jefferson’s reply with a letter to the Danbury Baptist, January 1, 1802:

Jefferson, like all the others, understood that the purpose of the First Amendment was to protect, not prevent, public religious expressions.  That is what the separation of church and state meant.  A century and a half later, there was still no misunderstanding about the meaning of the First Amendment or Jefferson’s phrase.

Then in 1853, a petition was sent to Congress urging separation of Christian principles from government:

U.S. Congress spent a year reviewing that possibility and emphatically rejected it, declaring in 1854:

“Had the people [the Founding Fathers], during the Revolution, had a suspicion of any attempt to war against Christianity, that Revolution would have been strangled in its cradle.  At the time of the adoption of the Constitution and the amendments, the universal sentiment was that Christianity should be encouraged, but not any one [denomination]…. In this age, there is no substitute for Christianity…. That was the religion of the founders of the republic, and they expected it to remain the religion of their descendents.”

There was no way the Congress was going to use the First Amendment to secularize the public square.  In fact, the opposite is true.

The U.S Congress of 1856 reiterated it, stating:

“The great, vital, and conservative element in our system [that is, the thing that holds our system together] is the belief of our people in the pure doctrines and Divine truths of the Gospel of Jesus Christ.”

The Congress refused to separate Christian principles from the public arena.  The Supreme Court did as well.

As a result, the Courts maintained that position for the next SEVEN DECADES!!!

The supporters in authority repeated the phrase so often that many began to believe that the phrase “separation of church and state” was actually part of the First Amendment.  Thus, fulfillment of the quote from Dr. William James, commonly known as “The Father of Modern Psychology” who stated “There is nothing so absurd but if you repeat it often enough people will believe it.”  In the courts today, people often quote the phrase “separation of church and state” more often than the First Amendment itself.

Since 1947: the “separation of Church and State” phrase is cited in over 4,000 court cases. The First Amendment is cited in less than 3,000 court cases.  The courts have now elevated a single phrase from a personal letter, a phrase completely reversed from its original meaning, above the actual language in the First Amendment itself.  This set the course for the public secularization in the years to come.

The 1962 Supreme Court in Engle v. Vitale, began instituting policy of public secularization by striking down this prayer – “Almighty God, we acknowledge our dependence upon Thee and we beg Thy blessings upon us, our parents, our teachers and our country.” The court determined that this prayer was defined as a “To whom it may concern” prayer because it only acknowledged God once, and as a result:

The Supreme Court in 1962-1963  with its decision in Engle v. Vitale and Abington v. Schempp reaffirmed removal of voluntary prayer and prohibited Bible reading in schools (a even more radical step) in light of the following facts of history:

The court’s animosity toward public prayer continued and expanded with the 1985 Supreme Court  that ruled unconstitutional the praying of a silent voluntary prayer in school.  How would the court know if someone was praying a silent prayer?

“May every citizen…in the country have a proper sense of the Deity upon his mind and an impression of the declaration recorded in the Bible: ‘Him that honoreth Me, I will honor; but he that despiseth Me shall be lightly esteemed [I Samuel 2:30].’” Samuel Adams

“As nations cannot be rewarded or punished in the next world, they must be in this.  By an inevitable chain of causes and effects, Providence punishes national sins by national calamities.”  George Mason, “The Father of the Bill of Rights”

“Providence has given to our people the choice of their rulers; and it is the duty – as well as the privilege and interest – of our Christian nation to select and prefer Christians for their rulers.” John Jay, first Chief Justice of the Supreme Court.

Also from the decision of 1962, the Supreme Court had now developed a new definition for religion, e.g.:

Although, we know from experience, that today’s “separation of Church and State” means that only “Biblical principles must be kept out of the public” not religious principles from these other “religions.”

What are some of the consequences of these rulings?

Consider these statistics re:our culture after the Supreme Court ruling of 1963: 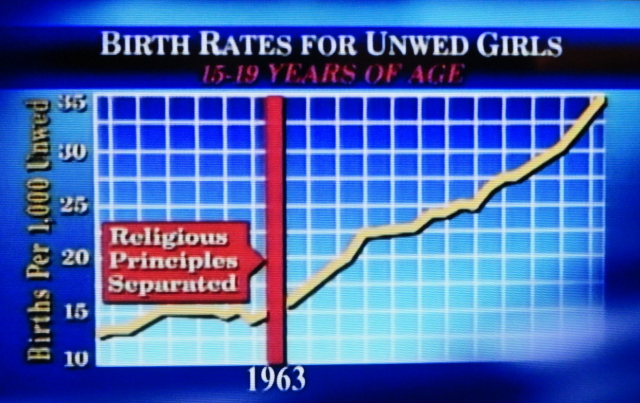 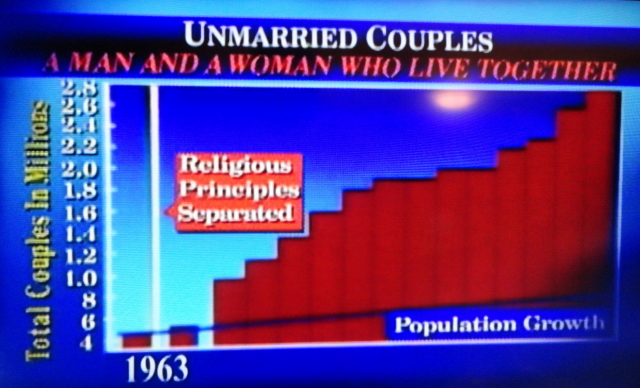 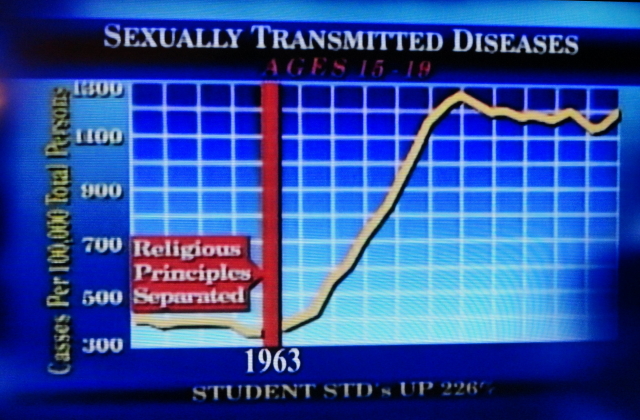 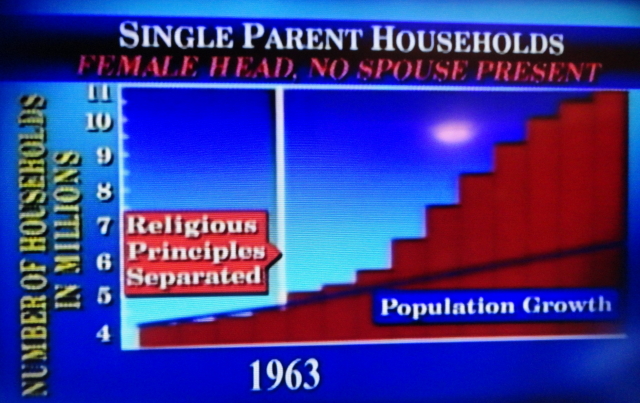 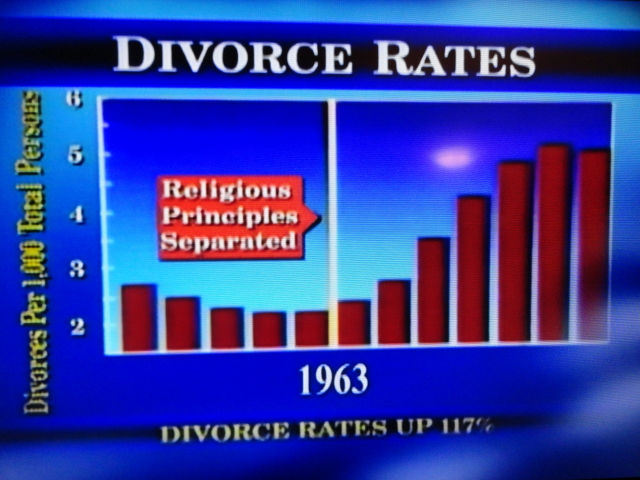 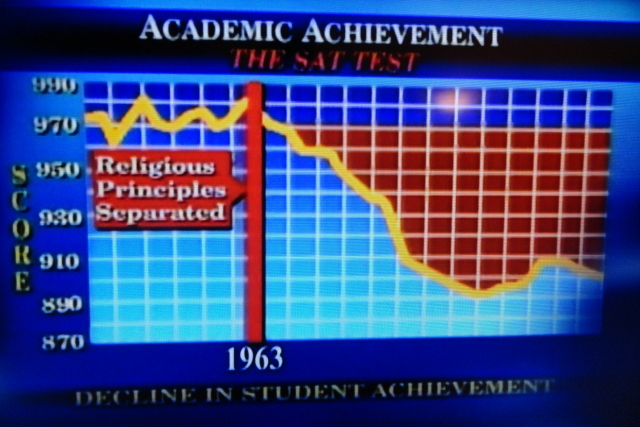 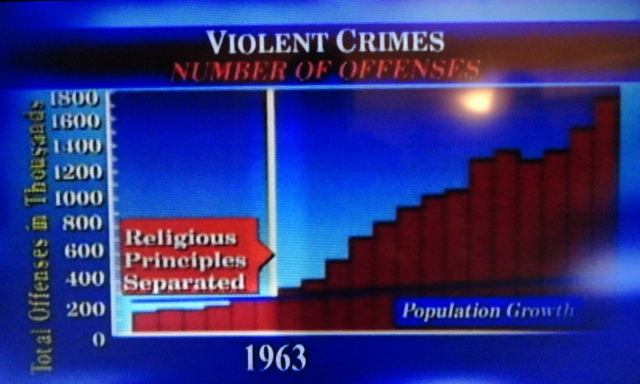 When we as a nation and its leaders know, pursue and pray for the righteousness that God desires, as modeled by the Founding Fathers of America (i.e. our Godly heritage), then God will respond to our obedience and faith in Him with blessing and exultation for our nation, as He promised.  Psalm 33:12 states: “Blessed is the nation whose God is the Lord.” and Proverbs 14:34 says: “Righteousness exalts a nation…”

I have a passion to educate American citizens and inspire them to re-establish our country’s foundations with the Biblical principles that God had originally designed for us.  I have prepared an educational presentation intended to ignite a spark in the hearts of fellow believers to remain silent no longer.  I proclaim the truths of America’s Godly heritage and provide action ideas for all ages.  “If God is for us, who can be against us?” – Romans 8:31

3 Responses to “Separation of Church and State”